When buying sweet potatoes, choose firm ones with brightly colored skins. Avoid those with holes or cuts that penetrate the skin. Store sweet potatoes loose (not in a plastic bag) in a cool dark well-ventilated place; avoid keeping sweet potatoes in the refrigerator. The skin can be left on (scrub well) or peeled. Slice, dice or bake whole, just like potatoes. Sauté, barbecue, fry or microwave. Serve as a vegetable with roasts, mash on own or add to potatoes. 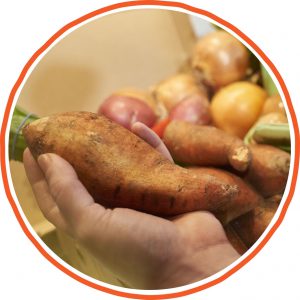 Try Sweet potato toast for a delicious low carb option. It needs a little longer in the toaster, (toast it twice) The best bit is choosing the toppings… chicken salad, tomato, basil… just go for it! For a healthy take on potato wedges, try sweet potato wedges. Peel, slice, sprinkle with sea salt and pop them in the oven. Bake them for 30 minutes, remove then drizzle with oil.

While both sweet potato and white potato are nutritious foods and both have a place in a healthy balanced diet, there are a number of nutritional differences between them. The major ones are*:

Is sweet potato good for me?

Yes! Due to its high fibre content and high amounts of vitamins A and C, sweet potato is a healthy inclusion in the diet. It also provides useful amounts of the B vitamin niacin needed for energy release along with potassium which is essential for a healthy nervous system.

Is sweet potato better for me than potato?

All vegetables are considered a healthy inclusion in the diet as different types provide different amounts of nutrients and antioxidants, as well as other natural components that are likely to contribute to good health. That’s why the Australian Dietary Guidelines encourage us to eat a variety of different coloured vegetables every day. While sweet potato is higher in vitamins A and C as well as fibre compared to white potato, white potato provides more niacin and potassium so it is good to include both types in the diet.

Baked sweet potato naturally contains around 6.8g sugar per 100g. It’s this natural sugar that gives sweet potato it’s ‘sweet’ taste. It’s important to know that natural sugar such as that found in sweet potato is not a concern when it comes to our health. In fact, the World Health Organisation* states there is no reported evidence of adverse effects from consuming sugars that are found naturally in foods such as sweet potatoes. The recommendations for reducing sugar intake are based on reducing added sugars in the diet, such as the sugar found in lollies, soft drinks, cakes, biscuits and sweetened breakfast cereals.

What is the best way to cook sweet potato to maintain its nutritional value?

Currently the nutritional data that is available for cooked sweet potato includes baked and boiled. When comparing the two in relation to nutrient content, baking comes out slightly better, likely due to the fact that when vegetables are boiled, some of the nutrients leach out into the cooking water and are lost. However, it is good to know that both baking and boiling retain a good proportion of the vitamin C and vitamin A that is found naturally in raw sweet potato.

One serving of sweet potato provides 5.6g of dietary fibre. This represents 18% of the daily amount needed in an average diet to maintain good digestive health.

How do I cook sweet potato?

What are the key nutrients found in sweet potato?

Sweet potato stands out for its high content of vitamin A and vitamin C. One serving (150g) of sweet potato provides more than 100% of the daily requirements for both of these vitamins. This is particularly useful for fussy eaters who may not eat a good variety of vegetables daily and may therefore otherwise not be meeting their daily needs for these two important vitamins. It is also useful for people who are eating smaller portions and may therefore be finding it difficult to meet daily nutrient needs, for example, those on lower kilojoule diets, or those with a poor appetite.

Sweet potato contains natural sugars which are primarily responsible for its sweet taste. The amount of natural sugar present is 6.8g per 100g (baked sweet potato). The amount of natural sugar found in sweet potato is similar to the amount found in other starchy vegetables such as beetroot, parsnip and corn. The World Health Organisation* states there is no reported evidence of adverse effects from consuming sugars that are found naturally in foods such as sweet potatoes. The recommendations for reducing sugar intake are based on reducing added sugars in the diet, such as the sugar found in lollies, soft drinks, cakes, biscuits and sweetened breakfast cereals.